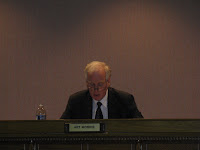 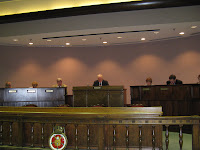 At Thursday's monthly board meeting of the Convention Center Authority, NewsLanc raised three issues of enduring concern in the Authority's contracts with Penn Square Partners:

NewsLanc's reporter also asked the board whether their previous plans to meet with Penn Square Partners in order to discuss the issue of naming rights clauses had been rescheduled.

"It's not something the board is actively considering," he said, adding that issues with signage must take place soon and "that would be an issue that would be taken up under the new Executive Director."

Following the meeting, Kevin Fry told NewsLanc that the board is not actively soliciting buyers for naming rights and has been advised that they would not be particularly profitable at this juncture.

Fry said that the issue of naming rights may be revisited in a couple of years once the Convention Center is expected to be more on its feet financially.

In other business, the board approved change orders adding approximately $175,000 in construction costs.

Facilities Programming Committee Chair Ted Darcus reported that construction of the project is 39% complete as of the end of March, with one day of critical-path recovery, reducing the overall slippage to 30 days.

The Authority also approved a formal job description for the Executive Director and small modifcations to the employee handbook.
at 10:15 PM