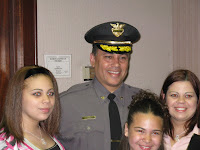 Rick Sadler has 27 years of experience with the Philadelphia Police Department - his most recent position being that of Chief Inspector.

Following the ceremony, Sadler said that he is "elated at such a wonderful opportunity" and said he is eager to roll up his sleeves and get to work.

He described his ladership as "roundtable style management," saying, "in a community like this, a diverse community, whatever problems exist... if we work at this as a team we can handle it."

"Don has been critical in managing the budget each year. His committment to hold the line on expense has ensured that city residents receive critical public safety services," she said.

Wednesday's ceremony was held in front of a packed room in City Council Chambers, Wednesday night. Numerous local police and members of Chief Sadler's family were in attendance.
at 11:21 PM