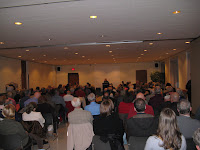 Government Study Commission representatives of both the "pro" and "con" sides on the Home Rule Charter got to make their points in a well-attended debate at Franklin & Marshall College, Tuesday night.

The approximately 1.5 hour debate was hosted by the League of Women Voters and attended by some 135 members of the public, including nearly every member of the Government Study Commission and such dignitaries as Lancaster County Commissioner Scott Martin and United Way of Lancaster County President, Susan Eckert.

Speaking for the "pro" side were Government Study Commission members Dr. Carol Phillips, the Chairwoman, and Mr. Jim Miller. Speaking for the opposition were GSC members Jim Bednar and Gregory Sahd.

Phillips reinforced his point, saying "We think it particularly important that our Commissioners assume a leadership role to move us forward. And if they are bogged down in minutiae, they are unable to concentrate on the important and vital issues with which our County is confronted."

"There is more than enough for them to do in maximal kinds of ways," she continued. "[Former County Administrator] Mark Esterbrook told us that the duties and responsibilities that we wrote for the County Administrator reflected 90 to 95% of what it was that he was doing in that position."

"How can we justify paying five Commissioners $55,000 per year for part time work?" asked Bednar. He also asserted that "the loyalty of appointed individuals is not to the citizens but to the individuals who appointed them."

Asked at one point whether the Charter would be good for business as the Chamber of Commerce asserts, Bednar insisted "A government is to be run by the people themselves and not by outside forces and special interest groups."

The "pro" side also invoked popular will, arguing that a Home Rule Charter "recognizes that a one-size-fits-all state-mandated document limits our sovereignty." Phillips quoted Ronald Reagan as having said, "This idea that government is beholden to the people, that it has no other source of power except to sovereign people, is still the newest and most unique idea in all the long history of man's relations to man."

"It is about we the people. It is about recognizing the unique needs and concerns of our citizens and crafting a government document [accordingly]," she said.

When the subject of Commissioner election by district, which is not in the Charter, came up, Bednar said he thinks it's a bad idea because it would segment the County into districts and lead each Commissioner to care only about his/her own district and not necessarily the County as a whole. He said that it would also give voters less choices as it pertains to County government.

Asked by a questioner, "Do you think that the Charter proposal is a reaction to the, shall we say, controversies of a previous Board of Commissioners?" Sahd replied, "I do."

He went on to argue that "Our current system has worked well for nearly 300 years... It is an effective, responsible, economical system of County Government."

"We would be moving from a tried, true, and tested form of government to an experimental one," said Sahd.

Another issue that came up is the ability of the Commissioners to remove elected officials from public office.

Bednar argued that the process will inevitably be used for political ends, saying "We all know what goes on in smoke-filled back rooms"

Miller replied that the provisions for removing an elected official from office for just cause are already in place and that the courts must get involved in order to actually remove someone from office.

Both sides sparred on whether the switch to Home Rule would result in higher or lower taxes, each quoting various figures.

Sahd called it "counterintuitive" to think that you can add layers of bureaucracy "and not see taxes and spending go up."

Miller denied that adding employees "adds layers of bureaucracy." He insisted that the elimination of the jury commissioners and the consolidation of row offices proposed by the Charter will result in cost savings of hundreds of thousands of dollars annually.

"I want the opponents to explain to me how taxes and spending are going to increase with four Republican Commissioners... [as if] they're going to appoint tax and spend liberals," he quipped.

Sahd injected politics into an argument as well when he said, "If I were a Democrat, I would oppose these changes because our representation [on the Board of County Commissioners] would go from 33 1/3% to 20%"

When the issue of citizen initiative came up briefly, Bednar said he thinks the thresholds are too low and that the provisions will allow citizens to place frivolous issues in front of the Commissioners and on the ballot. He also argued that giving people direct power distorts our representative, republican form of government.

Closing arguments brought the issue of the County Administrator once to the forefront again.

"This is a power grab vis a vis the County Administrator," Sahd argued.

Asked about that concern afterwards, Phillips said, "It's not true." She pointed out that nearly everything in the description of duties and responsibilities are things the administrator already does except for preparing the multi-year strategic and fiscal plans, which the Charter specifies must be done under the direction of the Commissioners.
at 7:50 AM