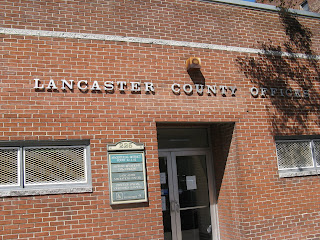 In one of the first significant hurdles for the new County administration, The Board of Lancaster County Commissioners opened a public comment period, Wednesday, as to how the 225 West King Street site should be used in the future.

Currently housing the offices of mediation, special offenders, human relations, and district justice offices, the current building was constructed in the 1960s.

Those offices, however, will be moving to the County's 150 N. Queen St. administrative center once the renovations to that facility are completed next year.

That leaves the question of what to do with the aging King Street building. Commissioner Chairman Dennis Stuckey, a Republican, said that the Commissioners anticipate "disposing of it in some fashion" but that "no decisions have been made."

He said that the Commissioners anticipate making a decision towards the end of the year, allowing for approximately three months of public comment.

What is clear, said Commissioner Scott Martin, a Republican, is that, over the long haul, "there will be considerable savings to the taxpayers [by consolidating the County offices in one location]."

Commissioner Craig Lehman, the lone Democrat on the board, stressed that he wants to see that "whomever would ultimately take control of this property would put significant investment into that property on that 200-block of West King Street to hopefully, hopefully be a stimulus for that entire West King Street corridor" and stressed that he "will not support, in any way shape or form tearing down [a] building to create a surface parking lot in any community in Lancaster County," going on to opine that doing so "creates gaps in the neighborhood fabric," setting the stage for blight.

Stuckey and Lehman said that the County has "had offers" with regard to the property and that "someone wanted us to gift the property to them," but they refused to identify who had expressed interest.

A few regulars at Commissioners meetings, including Bill Bonanno of Rapho Township and Bonnie Miller of Manor Township asserted that the County should sell the property to the highest bidder, obtaining the best financial sale for County taxpayers and let the city make its own determinations about zoning and permissible usage.

Commissioners Stuckey and Martin indicated that they would not rule out a parking lot for that location, as Lehman did, but suggested to NewsLanc that they are interested in putting out a Request for Proposals and getting the best financial deal for the sale of the property.

In fact, Stuckey went on to take a rare jab at his fellow Commissioner, saying, "I would point out that Commissioner Lehman was a City Councilman and City Controller... so he has a certain constituency, which he feels he has a responsibility to protect, and I respect that... I'm not going to rule anything out."

Commissioner Martin also showed his colors by expressing his opinion that, if Conestoga View had been put out to bid, that the County could have gotten a better deal on the property than it did.
at 11:34 AM